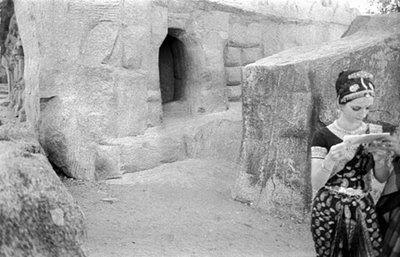 She took the name Menaka, but her other name was Verushka, and she claimed to be a Russian princess. I took pictures for her publicity brochures, for performances in Paris and other European cities.

The then French Ambassador to India came to Madras, Pondicherry and Chidambaram to see her perform because, she said, she was royalty, exiled in France.

I never found out what she really was.
at 23.4.06
Email ThisBlogThis!Share to TwitterShare to FacebookShare to Pinterest
Labels: photographs_blackandwhite

So enigmatic - I love the image of the woman in the classical south indian dance costume absorbed in some correspondence or document with the (symbolic?) opening of a cave behind... Very Jungian.

What is it about such still images that arouses something primeval in us?

This lady requested me to take her picture against a monument. I told her I was no good for taking the kind of pictures she had in mind: I could not take monuments or people in front of buildings, people together, or in full length. But she kept on persisting, and finally tricked me by bringing a Government of India geological survey license to allow me to take the photographs. She scared me by saying that it would expire unless I took the pictures on that very day. Most reluctantly I went grumbling throughout the 45 km. route; and took some 90-100 pictures. By another trick, she took away almost all of the negatives. I am trying to retrieve the few prints which remained with me for my exhibition, or brochures which she got published abroad, and put them on the blog.

I had done a lot of shouting, because this was not my subject, nor where I felt competent, all of which made me work hard, which brought an astonishing result. The picture was not spontaneous; it was composed with a very deliberate plan and execution. This is perhaps a drawback in me, that more or less all my pictures are planned, and take a lot of time.

I’m delighted that you noticed the picture and liked it.

Though planned, the picture has a strong feel of spontaneity - almost like a grab shot you can get during a planned shoot.
Enigmatic sums it up well.
From what you say the mysteriousness is not restricted to the photo but extends to the subject also.