Smile on a Summer Night 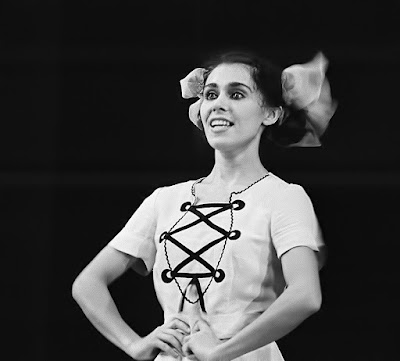 I took this picture in 1970, at a Russian ballet performance at Chennai's Music Academy.  The dance from which this picture was taken was based on Ingmar Bergman's film, Smiles of a Summer Night (which in turn was inspired by Shakespeare's A Midsummer Night's Dream).

The reason for writing this is the manner in which I astonished myself by obtaining the picture in the quality that, at least to me, was most satisfactory:  I had very ordinary SLR camera gear, and I was supposed to write the review in the next day's paper.  Since someone else took my seat in the front row, I was in the fourth row instead, and had to fix an old-fashioned telephoto lens to my camera and then, to avoid shake during the long exposure that I needed, to insert the camera between two chairs in the row in front of my seat.

This caused pleasant disbelief, and today, as I post it on the blog, from a 46-year-old print (negative lost), a great deal of joy and satisfaction. I hope that my feeling will be shared by whoever views it, and will find justification.

at 7.7.16
Email ThisBlogThis!Share to TwitterShare to FacebookShare to Pinterest
Labels: photographs_blackandwhite

Very interesting to know about the technology at that time and the pain that you took in capturing this picture. Tough to believe the zoom level of the camera you had used at that time. Love B&W pics.

I very much like the captured instance.A beautiful expression.Given the technical challenges faced,this would have brought a lot of satisfaction