gratefully for an eloquent gift
more than unexpected
undeserved
at 26.4.06 1 comment:
Email ThisBlogThis!Share to TwitterShare to FacebookShare to Pinterest

Dr. S. S. Badrinath, Chairman of Sankara Nethralaya, sent me two links to articles concerning spectacular breakthroughs achieved by Sankara Nethralaya in the annals of ophthalmology and innovations in surgical procedures, which are as follows:

I am also posting my response to my very dear friend:

Our sun is one of the mediocre stars in our home galaxy, which we call the Milky Way. It is in decline, enfeebled by age. Six billion years old, probably with three billion more years to go, when it would die. Human life, or all life as we know it on our blue planet, which we so fondly call Earth, can trace direct ancestry and connectivity only to our sun, before it can relate to the inter-galactic universe. Every element of our body and our environment is derived from the emanations of the sun. But then, most of all this is not known to people. What is most known about the sun is the Light, and therefrom the Vision.

Light and vision, for the better part of the past fifty years, have been your principal, if not exclusive, occupation. In making it so, indirectly, you have paid the highest respect to the originator of our species, the sun. More than anyone else that I know of, you have protected, restored, or even given vision to people, with devotion and skills not easily comparable with any other during this period. Single-mindedly enrolling Vasanti, and many other devotees, you spread your knowledge and ingenuity to create a monument, the dedication and success of which cannot be matched or measured. I salute you, your team, and your monument.

I had composed and taken a picture specially for him, which I hope continues to illuminate his office: 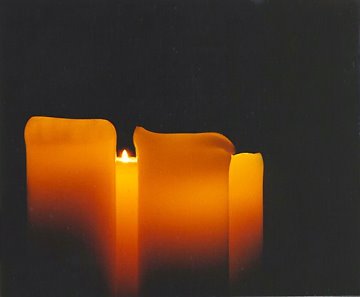 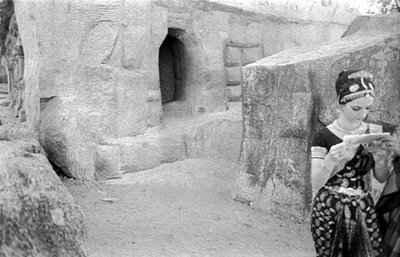 She took the name Menaka, but her other name was Verushka, and she claimed to be a Russian princess. I took pictures for her publicity brochures, for performances in Paris and other European cities.

The then French Ambassador to India came to Madras, Pondicherry and Chidambaram to see her perform because, she said, she was royalty, exiled in France.

I never found out what she really was.
at 23.4.06 3 comments:
Email ThisBlogThis!Share to TwitterShare to FacebookShare to Pinterest
Labels: photographs_blackandwhite

There seems to be a paucity of imagination when it comes to naming Hindi films. Going by the style in which more and more Hindi films are named these days, I would like to make a contribution of my own. This can apply to any film, since film names and their content have little in common:

at 21.4.06 2 comments:
Email ThisBlogThis!Share to TwitterShare to FacebookShare to Pinterest
Labels: photographs, science

My father was known to everyone as Bapa.

When I was a boy, Bapa always insisted on making herbal hair oil, not only for our family in Calcutta, but for our relatives in Bombay, Rajamundry, Madras and his village of Amreli, in Gujarat.

Preparing the hair oil was a major undertaking – it was one of the ten or twelve events of the year. First a special stove had to be made, from Hooghly mud, on the open terrace outside our rooftop rooms. Then Bapa accumulated medicinal plants of all kinds – a cornucopia of the entire Ayurveda. Most were in the form of dried twigs, which he piled up by the stove.

He would fill a big pot with sesame oil, and add the twigs to it. We children would sometimes play a trick on Bapa, by slipping a few of the regular bits of wood used for firewood into the herbal twigs, and laugh as he solemnly put them into the pot along with the rest.

The oil and its medicinal plants would be heated for several days and nights, until it became dark brown, like strong tea. Then all the empty bottles that could be collected were brought out, washed, and their original labels removed. Bapa would paste on new labels saying ‘Bapa nu tel’ – Bapa’s oil. (All glass bottles and jars were recycled repeatedly, so this labelling was important.) The oil was strained into the bottles, and labelled for each family member, near and far.

All this was fine, but then I had to actually put the oil in my hair and go to school. Most of my friends, unlike me, were wealthy, and they wore ready-made, perfumed oil in their hair. As soon as they smelled me coming, they would make fun of me for my oil’s absence of perfume and smell of burnt wood. At the same time, they envied my thick hair, so some of them would come back to me privately, and I would give them small bottles of Bapa nu tel.

Some people had asked me for the formula for Bapa nu tel. Here is my reply:

I give up on the hair oil recipe, because I cannot either recall or lay my hands on papers from my childhood. But then, I can vouch for most branded Indian hair oils which are Ayurvedic, like Himalaya, Navratna, Dabur. In case you want their formula, I have them in the therapeutic index, and if you ask for it, I'll send it to you. Sorry, but it looks like Bapa no tel has ended. Fortunately, man's preoccupation with hair growth or its loss can continue to entertain us, one way or another, while we last.

at 19.4.06 4 comments:
Email ThisBlogThis!Share to TwitterShare to FacebookShare to Pinterest 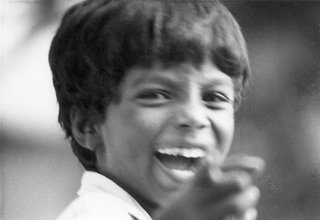 One from the heart, for you and you and you.
at 16.4.06 1 comment:
Email ThisBlogThis!Share to TwitterShare to FacebookShare to Pinterest
Labels: photographs_blackandwhite

"Satyameva Jayate": truth shall always prevail. As far as I know, the Indian government is the only one in the world which has used this slogan as its motif, its faith. It behaves as if this phrase is fundamental in all spheres of Indian life, especially in politics. But in fact, the Indian government declares “Satyameva Jayate", and at the same time is its ultimate violator.

Where does the compulsion come from, to make mockery of our national symbol, the Ashoka chakra, by the ultimate lie shown as proclamation under it. It is so ubiquitous that most people don’t even know that it exists everywhere, where they work and transact their day to day business. Surely our conquerors did not compel us, nor did the United Nations. Nobody would blame us if we lied without claiming that we are telling the truth. If we lied and believed that we lied, and accepted that others lie, as an essential component for survival in this environment. Why, then, this ultimate lie?

Because of the synergy between lies and corruption, our country is one of the most rampantly corrupt. We are automatically a country with among the largest number of liars. Where does truth reside, let alone prevail? In a slogan on the wall behind the torso of a politican giving a speech? On our currency notes? In a court of law, in the Parliament, at the police station, in a teaching institution, in the electricity board, water supply, construction, commerce, industry, temples of gods and religions and spirituality, income tax office? Where?

Can this slogan, which presides over pervasive corruption, not be removed? Does it serve any purpose, or is it an irony, a cruelty, a joke? Dishonesty and corruption are endemic to mankind everywhere in the world. Truth has increasingly been at a premium in the evolution of human civilisation, and its purveyors’ travails are countless.

One can say many different things without being contradicted: Hum aage bhadenge; we shall prevail. May truth prevail. Many others can be coined. Should this lie, therefore, not be removed, and therefore the blemish, especially as it is not required by, or believed in, by anyone, in authority or from the public?

I received this question: How do you differentiate betwen an ideal and a statement? If "satyameva jayate" is a statement, can you give an example as to how the same statement can be converted to an ideal?

My Answer: Yes indeed I can: "May truth prevail" is an expression of an ideal, and therefore even if not achievable or practical or practiced, people cannot take an exception to it. On the other hand, "Truth always triumphs", being a statement, implying a fact and being therefore factual, if provably not so, can not only be objected to, but be rejected.

I also received this question: Which Truth are we talking about here? In this relative world there are only relative truths. A can have A's truth B can have B's. Can there be an absolute Truth? By saying "Satyameva Jayate", which Truth they are talking about? Any thoughts...?

My Answer: The world is not relative; the manner in which we humans interpret it and then conduct ourselves across the length of our sojourn, is relative. Truth is erroneously but conveniently assumed to be absolute,while in reality it not only differs, but is notoriously inconstant and fickle.

When men make announcements on truth, through spoken or written pronouncements as a dogma, they imply and impute the sublimity of the absolute to it, and even if they cannot prove it to be so, they are too frightened to accept the notion and live with it in peace. Satyameva Jayate, truth will ALWAYS triumph, is intrinsically untrue, as an edict, or proclamation,both because it contains the assumption that truth is absolute, but also that it is invincible.
at 9.4.06 7 comments:
Email ThisBlogThis!Share to TwitterShare to FacebookShare to Pinterest

I had written a post about Krishna as a provider of alibis, to which someone made this comment:

Krishna is not an alibi but a resolution to the anxiety of living.
All you need is love. Redundant? The alternative is insanity.

Krishna is cardinal in the epic Mahabharata, as the conscience of all the characters in the narrative, as they played, or did not play, their various roles, treacherous or benevolent. Krishna's recitation of the Gita provided them all with validity, by justifying every lie, duplicity when necessary, even murder. He provided them all with an alibi, to ease every mind of its need to resolve all the contradictions man has to live with.

I would not recommend to anyone not dying or contemplating suicide, to renounce the ability to believe in conscience, to make adjustments with the difference between thought and action, and to derive respite from alibis.

What I wrote was a lament over my failure, very early in life, to retain this ability. If, therefore, your definition, and your understanding of it, are universally acceptable, then I am insane.

But remember yet again: I was not making recommendations to other people, or preaching to them. I was only describing my situation. You are welcome to your abilities, which you employ in the conduct of your life, as are others. My permission is unquestionably not only not sought, but definitely not required.
at 1.4.06 No comments:
Email ThisBlogThis!Share to TwitterShare to FacebookShare to Pinterest
Newer Posts Older Posts Home
Subscribe to: Posts (Atom)