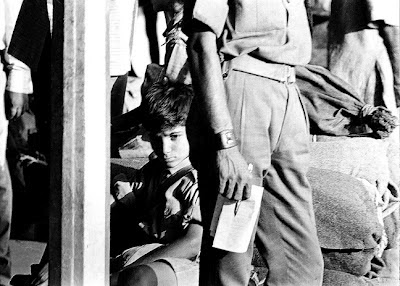 This boy would be in his early fifties now. At Mettupalayam station, in 1970, his penetrating gaze, which conveyed sharp intelligence, caught my imagination and curiosity. In fact, I identified with him, seeing in him something of myself as a boy. What would he be now: a doctor, a soldier, an engineer, a rickshaw driver, a priest, a terrorist? Would he be living in India, or did he go abroad? Did he die? Nothing can be known, perhaps.

His face raises questions about the meaning of what is popularly relegated to the vagaries of destiny.  When we look backwards, events that occurred years ago have for all practical purposes lost the strength of their meaning in our present lives; yet they did occur. We place more emphasis on our futures, forgetting the past; while both are equally important in the passage of our lives. Somehow, the certainties of the past are less fascinating than the uncertainties of the future.


About the text:
i had not thought about this aspect of our selective focus on the future. It must stem at least partially from the illusory sense of agency and therefore power that the future allows; that it is in our control to defeat the uncontrollables that govern our existence. No amount of recolouring the past permits that comfort because we know beyond all reasonable doubt that most critical elements of our experience transpired without our volition. But tomorrow is another day.

Thank you for causing this thought.

It would certainly be difficult to know where did that boy’s life ultimately take him. But a smart boy like him was, perhaps, thinking that I would like to be like that one over there snapping my picture, when I grow up.

If we are mostly driven by the future, perhaps it is, also, due to its being a blank canvas in our mind’s eye. We are free to sketch, erase & re-sketch and paint our future at will and to our liking.

I do not think they have; but I hope the ghosts of my past never lose meaning for me.

charu
at 25.3.12 3 comments:
Email ThisBlogThis!Share to TwitterShare to FacebookShare to Pinterest
Labels: photographs_blackandwhite 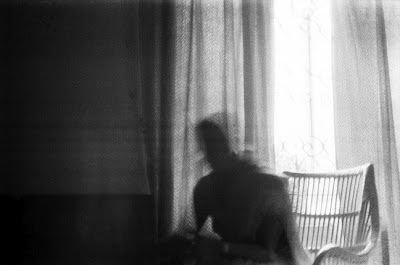 ------------
Charu wrote:
Likewise, light filtering thru the window behind the subject adds to the blurring of imagining with the authenticity; as if creating a parallel world.

I frequently stare at the picture and ruminate: shadows are to the mind what memories are to the heart (i use the mind heart distinction as just a manner of speaking to differentiate between thoughts and feelings).


Forever dissolving forever forming persistent criss crossing across life times transforming lived experience through constant recreations, aided most ably by that enemy within, the subconscious.  Doubts and dilemmas then plague not just the present, they can even stand the past on its head and vanquish our tenuous hold on reality.

Illusion cannot equal or be the same as mystery; nor, definitely, delusion. Probably, it may be the difference between real and unreal.

Illusion is mostly make-believe, and generally explainable by most or at least some. Mystery, on the other hand, may prevail symbiotically with ignorance. It is not illusory, visually or audibly: it is just something unexplainable to some, and easily understood by others, and treated with scepticism by the rest. Delusion, of course is being completely out of touch with reality, and has no relation to either illusion or mystery. Its closest ally is grandeur, gullibility, and punishment or exploitation. 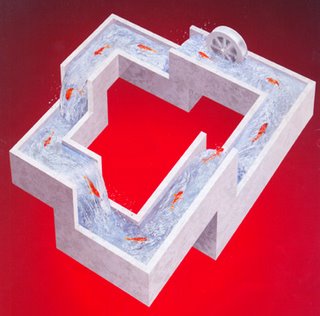 (This illustration is from a Honda institutional ad, and is named by them Endless Flow. Note: the water seems to be flowing downward from one point; theoretically it should end at another point, which would be the bottom, but in the illustration it flows down continuously, as well as climbs up continuously.)

Among man-made illusions, two-dimensional art forms are the commonest, but most imaginative and creative. M.C. Escher, the Dutch artist, devoted a great deal of his work to creating such masterpieces, from which the above illustration has been directly derived. Here is the original (it is a march of soldiers, climbing up and down, up and down, endlessly): 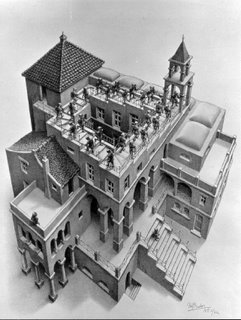 Whether he himself was inspired by some Greek or ancient, definitely western, artistic, philosophical, concepts, I am at the moment not in a position to confirm. But he did a great deal of work, inevitably, because it is unavoidably obsessive. He has many followers, drawing equal amount of fascination.

Let me join others who have wondered, or those who are reading this blog, as to whether, given three-dimensional reality, can this illusion of endless march, or endless flow, or endless whatever, be physically produced, and therefore converted to non-illusion and three-dimensional shape conforming to existing laws of physics and science.

Of those who spend time on such speculation, most just show fascination and confusion, and do not traverse to convert the notion as illusory or physically possible. Some believe that, given means, models can be created in three-dimensions, with wood, steel, cardboard or other materials, or even bricks, to establish the concept of continuum.

I have not been casual on this matter, as I am obsessively seeking clarity in every sound and every sight. I have been able to prove that this illustration belongs totally to the concept of visual illusion made possible by elimination of third dimension, by drawing it on a flat surface. To prove this, the clinching argument that I have provided is that to produce this physically would require the knowledge of the highest and the lowest points in the illustration or drawing. If you observe the picture, you will find that all points are either the highest or the lowest, at the same time. It is therefore not manufacturable into a real object, and therefore scientifically unviable.

Einstein said 'God never plays dice.' Since, according to me, there is no God, only human beings play dice. Interestingly, they have no other choice because of the caprice of life itself. It is fun, therefore, to defy science and glimpse the unreal, and be pleasantly fascinated by one of the most harmless aspects of man's creative mind.

------------------------
update: Charu wrote: My reaction to this all encompassing and illustrative explanation can only be, total acceptance. Having said that, even with my rudimentary knowledge of Physics, I know that water flows down and finds its own level; and it can only flow up with the help of pressure. So in the given picture of Honda ad, and similarly some of the pictures that I sent you one’s brain is jarred and pauses at those impossible points and says “it cannot be’. That happens to me. And yet, when I pull back from those points and look at the total and improbable construction of the images, I get intrigued. The artist you mentioned in your write up, obviously talented, is selling intrigues and I am buying them for mere and sheer perceptual, visual and sometimes esthetical enjoyment. I had already read your dissertation, first time. I reread it. For, my retention is greatly flawed. love charu

-------------------------------
Anonymous wrote: The way you have constructed the thesis, each word chosen with such care placed at just the right place, i felt like the fish were dancing in my veins. What a funny wriggly thought but nice too because actually the fish are your words quietly floating updown updon being the high and low point simultaneously and the way you have defined and explained the three things illusion mystery and delusion... awesome.
at 15.3.12 1 comment:
Email ThisBlogThis!Share to TwitterShare to FacebookShare to Pinterest

Perspectives are eternally in flux. They are never constant. They vary in a continuum as far as human beings are concerned, depending upon their circumstance, disposition, aptitude, success or failure. Perspectives have no reality because ultimately they do not have a constant point of reference. Large can be small, rich can be poor, poor can be richer than the poorer. Beauty or absence of it, or the measure of it, vary, and therefore appreciation or rejection.

Our sun is the largest object as far as we are concerned, in terms of our knowledge of its distance, volume, its contents, its emanations. Actually, we are products entirely of whatever the sun ejected, which became our building material. And yet, this very sun is scientifically accepted as a mediocre star in our own galaxy (not to mention some stars in our neighbouring galaxies which might almost occupy the major portion of their galaxies themselves), which is supposed to have a billion stars, far larger and presumably more complex and fascinating than our own, even if hazardous to any form of life.

Watching a football match from the ground, our vision encompasses the running, kicking, players, spectators, noises they make, goal-keepers prone to being lost in their own thoughts; but the same vision alters so completely if you get into a helicopter and hover over the playground. Then you see the village. You see a woman, unaware of the football game, buying vegetables. You see a man smoking hookah and watching over a child crawling towards a well, etc.

From my childhood, altering perspectives of objects and events has been a continually fascinating saga. One verse in Gujarati (I think that the full name of the writer contained Govardhandas and something, but I can be wrong), which, therefore, I cannot forget reads:

Large Is Small In Larger, So Then Small Is Also Large (in smaller)
If The Enormous Light From The Sun,
From Which The Glow Of The Firmament Comes,
Is But A Small Dot, Then Why Not Appreciate
The Tiny Lamp At Home


The idea of the simile being that the sun is so large, yet so small in the sky; the wick of the lamp in the home is so small, yet it lights up the house.

So then, what is the difference: eternally shifting, drifting, teasing, evasive perspectives.

For those of us humans who are aware and sensitive to the issue of perspective, the phenomenon is bringing a shift in our perception of ourselves, our lives, and our place in the enormity of schemes. We are suddenly as small as ants, or worse, less than atomic particles; or, most of all, non-existent as far as the larger perspective is concerned. I feel very foolish for taking myself seriously. I feel vain, that I had an idealism and I wanted to improve the world, if not the universe. Have I made any ripple, posting these ruminations onto this website, even in my own house, let alone in my colony, city or elsewhere. Had I not written, the world would not have suffered any kind of affliction or deprivation. So then comes my theory that man's ability to survive in this world is in direct proportion to his ability for self-deceit. By that count, I am deceiving myself, and existing, although maimed by this knowledge. Look what consciousness of perspective does and can do.


Illustration of perspectives from Worlds Within Worlds: A Journey Into the Unknown by Michael Marten, John Chesterman, John May and John Trux. (Each of the first four pictures is enlarged one hundred times the area of the preceding one. The other pictures are in increments of ten.) -------------------------------------- Charu wrote: Composite of slivers Is the world to him, and he Thinks the world of it
at 4.3.12 1 comment:
Email ThisBlogThis!Share to TwitterShare to FacebookShare to Pinterest
Newer Posts Older Posts Home
Subscribe to: Posts (Atom)