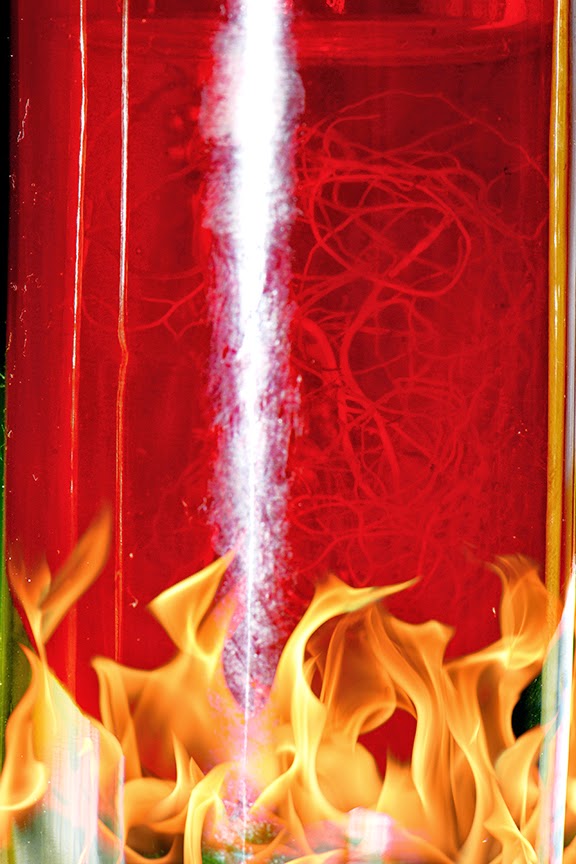 We do not comprehend our lives as we live them, in terms of societal connectivity, the environment, not to mention our own domestic and interpersonal situations, let alone those arising from different cultures, different countries and different civilizations on our shrinking, wounded planet. We do not understand our deaths.

Yet the thirst for comprehension of life's origin, and the entire gamut of scientific discipline, works to find out its chemical, physical and perhaps mechanical functions. At the same time, we want to ensure that our discoveries are presented, and bring cultural revolution, in our own individualistic, didactic ways.

Those involved in the search, with great qualification or insatiable curiosity for understanding, can come out with theories and what would appear to be supportive evidence and proof, which gets altered or enhanced by some other so-called truths, at other places and by other seekers.

Hence the search of more than a millennium brought the knowledge of DNA. In the recent past this knowledge has led to the desire and ability to create DNA in the laboratory, even though such an empowerment has led to apprehensions, ethical and legal questions, outrage within religious communities, charges of blasphemy in tinkering with God's work and plan, and so on.

And now it is the genome. And then, do not have doubt, something else beyond it, ad infinitum. The purpose is questionable because the goal is eternally shifting: no matter which point man reaches, he wants to seek another point, the cost notwithstanding. At worst, if not condemnable, perhaps in the long run, in terms of absolutes, the effort, although seemingly fascinating, is futile.

About the composition I don’t even want to know what you did to whom. It is enough that you caught in a frame the music of the spheres and the dance of life.


The colours for me embody all the elements bound in a dynamic dialogue.  It is a mesmerising spectacle. 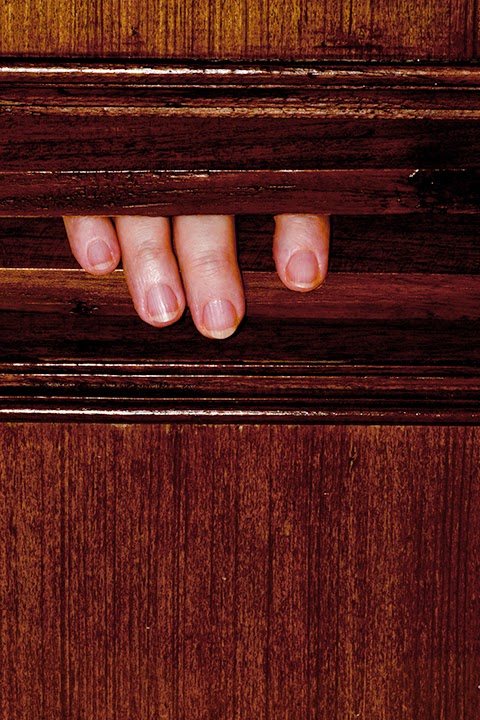 every wakeful moment
a curiosity and a discovery
at 28.5.14 1 comment:
Email ThisBlogThis!Share to TwitterShare to FacebookShare to Pinterest 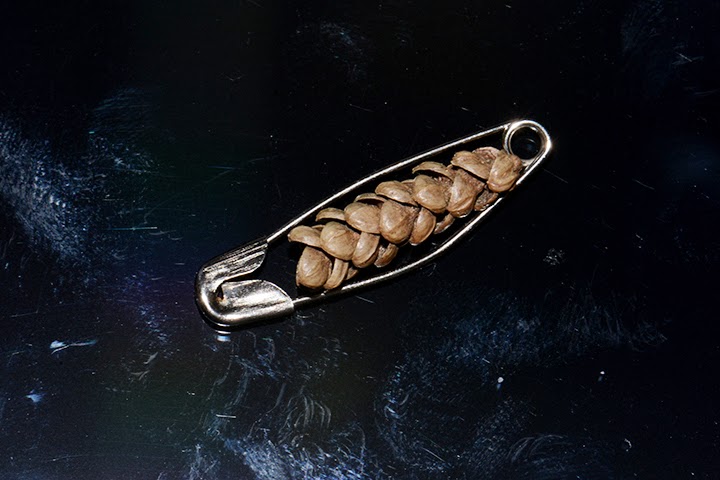 How safe is life: essentially human, because it is the only form which is conscious of itself, that it is born, exists and expires.

And because of humanity's unending exponential evolution, how much more or less endangered have all other forms of life become?

In fact, they have more chance of survival than humans, because their genes have no other agenda than to adapt, to live on.
at 28.5.14 1 comment:
Email ThisBlogThis!Share to TwitterShare to FacebookShare to Pinterest 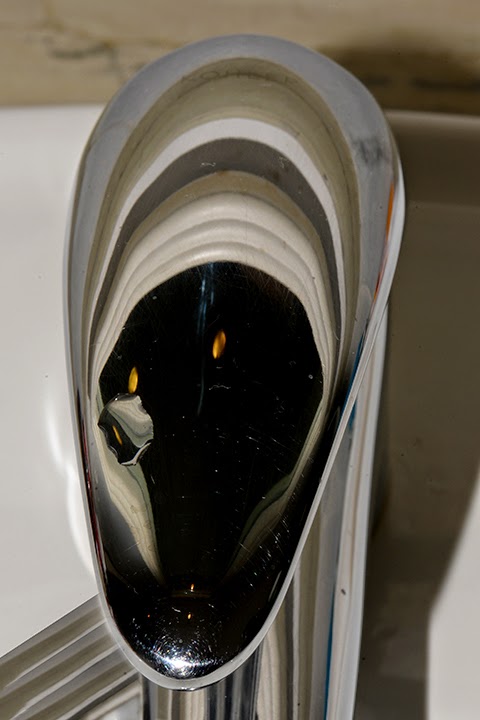 1929 - She arrived in India, and began her novitiate in Darjeeling.

1931 - She took her first religious vows as a nun. At that time she chose to be named after Thérèse de Lisieux, opting for the Spanish spelling Teresa.

1937 - She took her solemn vows, while serving as a teacher at the Loreto convent school in Entally, eastern Calcutta.

1946 -  She experienced what she later described as "the call within the call". "I was to leave the convent and help the poor while living among them. It was an order. To fail would have been to break the faith."

1948 - She began her missionary work with the poor.

1950 - She received Vatican permission to start the diocesan congregation that would become the Missionaries of Charity.  Its mission was to care for, in her own words, "the hungry, the naked, the homeless, the crippled, the blind, the lepers, all those people who feel unwanted, unloved, uncared for throughout society, people that have become a burden to the society and are shunned by everyone."

1952 - She opened the first Home for the Dying in space made available by the city of Calcutta (Kolkata).

1979 - She was awarded the Nobel Peace Prize, "for work undertaken in the struggle to overcome poverty and distress, which also constitutes a threat to peace.”

After Mother Teresa's death in 1997, the Holy See began the process of beatification. This process requires the documentation of a miracle performed from the intercession of Mother Teresa.

2002 - the Vatican recognised as a miracle the healing of a tumor in the abdomen of an Indian woman, Monica Besra, after the application of a locket containing Mother Teresa's picture. Besra said that a beam of light emanated from the picture, curing the cancerous tumor.

2003 – She was beatified, the first step towards sainthood. A second miracle is required for her to proceed to canonisation.
-----------------------
The above was gleaned from Wikipedia. It does not reflect my views on religion in general, Christianity of any persuasion, or the processes they pursue and impose, with belief or otherwise, on multitudes of interconnected rituals, the recognition of miracles, and the process of canonisation.

Living in India, and specifically having spent in Calcutta the years which formed my intellectual systems and the confines which would guide obstinately my existence, I was aware of her being there. What I want to convey is that there did arise in me admiration bordering on worship in humility, which included small symbolic acts by me of charity and succor. However, my admiration was not unmixed. Later, many doubts about the definition of good and evil, and what motivated either, arose as more and more questions took possession of my mind. Mostly I did not find objective and absolute answers. I live a life condemned by doubt.
at 27.5.14 1 comment:
Email ThisBlogThis!Share to TwitterShare to FacebookShare to Pinterest 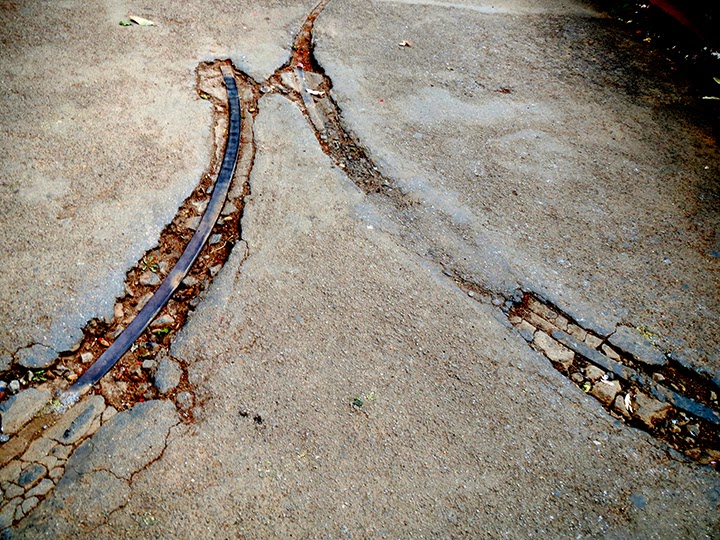 There is a quiet acceptance of the wear and tear that existence puts one through. The colours ash brown blue grey are all so dignified in their resignation, no breast beating on decay and decline nor any sign of futile struggle. I thumb.
----------------------------
Charu wrote:
at 26.5.14 1 comment:
Email ThisBlogThis!Share to TwitterShare to FacebookShare to Pinterest 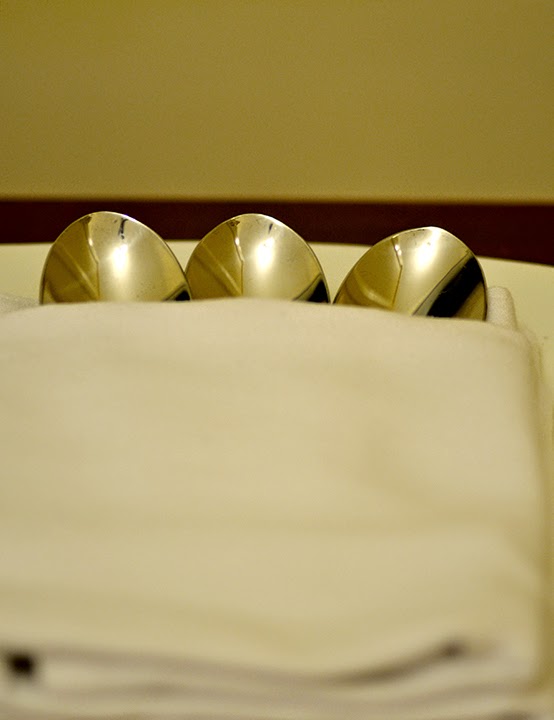 Anonymous wrote: The colour choice of Triplets is so appealing and the image of creatures snugly swaddled so reassuring in a time of harsh hostility.

at 20.5.14 No comments:
Email ThisBlogThis!Share to TwitterShare to FacebookShare to Pinterest 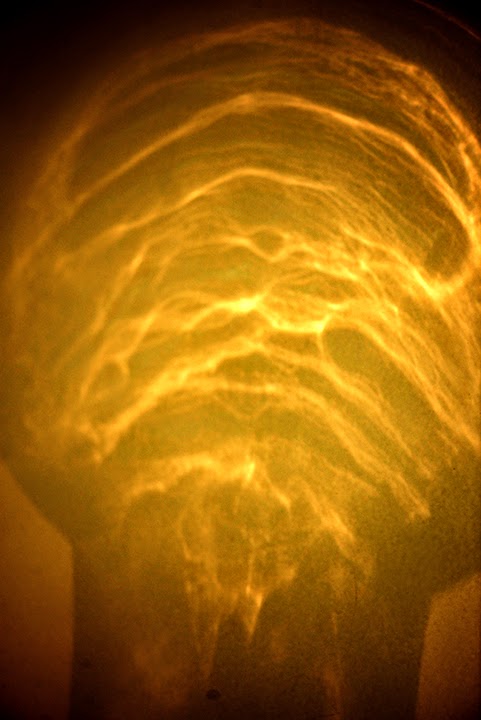 all but all cease
nothing but nothing
exists as non-existent

perchance life and then


nothing into nothing
at 19.5.14 2 comments:
Email ThisBlogThis!Share to TwitterShare to FacebookShare to Pinterest 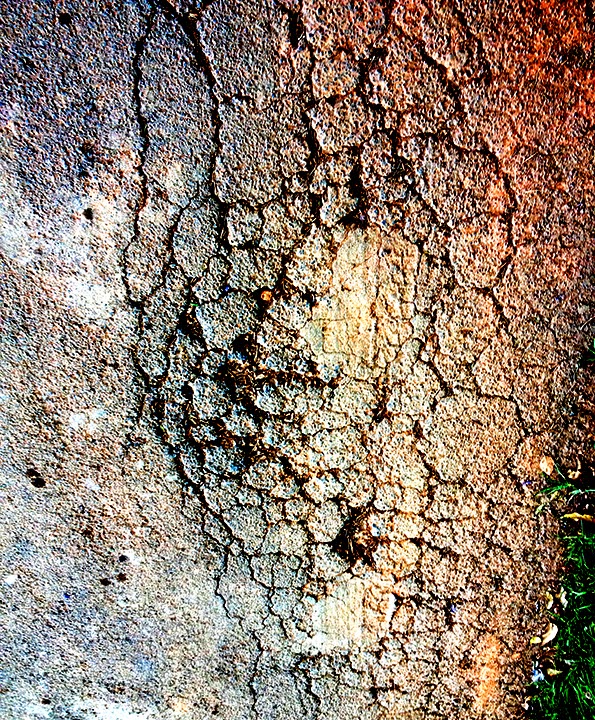 or more?
has it only been fissured
or damaged, devastated
or is it destroyed beyond
restoration
at 16.5.14 1 comment:
Email ThisBlogThis!Share to TwitterShare to FacebookShare to Pinterest

Back to the Womb 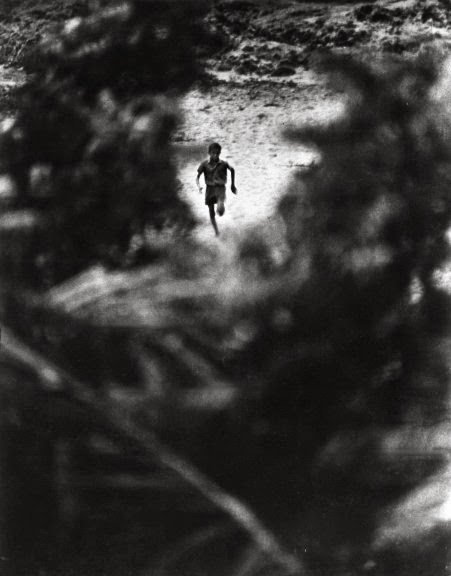 AND I CLOSE MY WEARY EYES
TO RUN BACK AGAIN INTO
THE ONE TIME OF MY DISSOLUTE DAYS
WHICH I CAN RELIVE WITHOUT REMORSE:

THEN I HEAR MYSELF
CALLING OUT FOR ME
IN HELPLESS WISH
IF NOT TO BE ABLE TO
RETRIEVE MY LOSS
TO RETAIN AT LEAST
THE DESIRE AND ABILITY
TO LIVE WHILE I LAST
WITH NOSTALGIA
at 12.5.14 1 comment:
Email ThisBlogThis!Share to TwitterShare to FacebookShare to Pinterest
Labels: photographs_blackandwhite 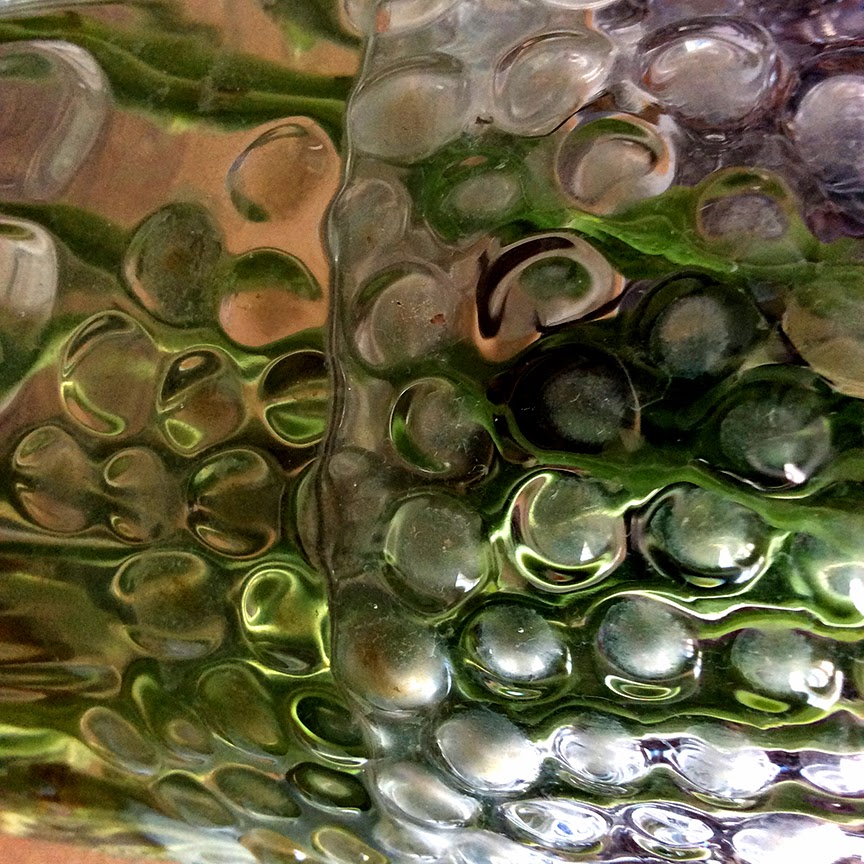 The title of this picture is a lie, even if half in jest and half metaphor.

The truth of the matter is that consciousness, especially human, is extremely volatile and turbulent, only accidentally and transiently at peace, restful, harmonious by proxy or exhaustion, and not by its own nature. The picture is too gentle, almost soft, almost musical, and has a flow which is insanely unaware of the storms ahead.

The title is a dream, fantasy and wishful thinking. Given the awareness of the life in which we are all entrenched, perhaps this unrealistic, jarring note becomes forgivable.

I have not forgotten, and must remind those who chance upon this picture, that as much as 90% of our conscious activity is motivated and activated by the limbic part of the cerebellum, or the small brain, and is therefore in the clutches of our subconscious. Very little that we humans do is from our conscious knowledge, but is guided or most frequently, misguided by our subconscious. My picture above may be one such escape.

If the picture is wrongly labeled as 'Stream of Consciousness', on purpose, even in jest or otherwise, and if the Unconsciousness is really this flowy, then I am willing to stream away in it.

It’s not flowy, it is stormy. As I wrote in my post, “The truth of the matter is that consciousness, especially human, is extremely volatile and turbulent, only accidentally and transiently at peace, restful, harmonious by proxy or exhaustion, and not by its own nature. The picture is too gentle, almost soft, almost musical, and has a flow which is insanely unaware of the storms ahead.”

Do you want to float away in it? Be my guest.

at 4.5.14 3 comments:
Email ThisBlogThis!Share to TwitterShare to FacebookShare to Pinterest 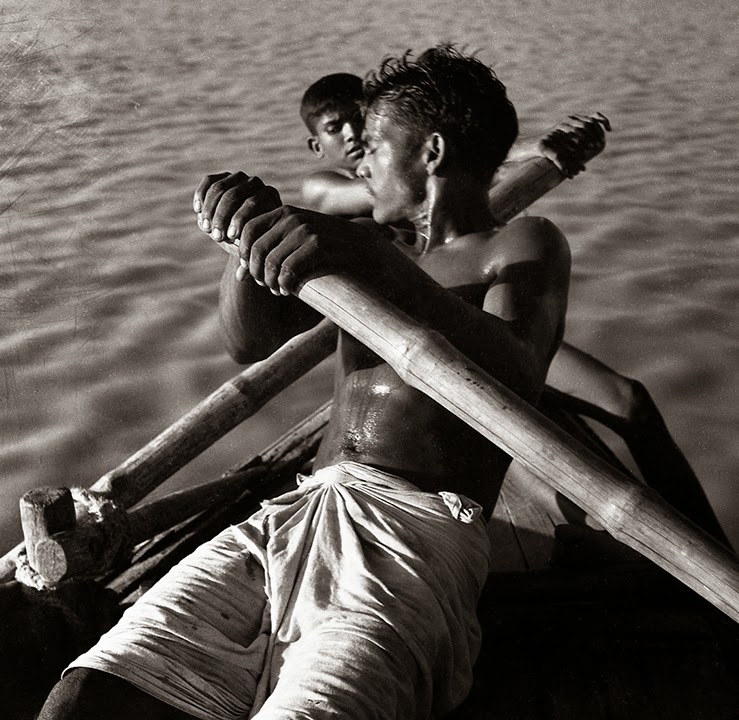 I was 15 (1951), and was crossing the Hooghly River from Dakshineshwar to Belur Mutt, Calcutta. We were four or five classmates, and I was much pampered captain, monitor.

One of my friends had a newly-bought Arriflex double-lens reflex camera, and he didn't know how to use the levers for aperture, shutter speed, distance, and speed of the film (which was at that time denoted in DIN, as opposed to ASA, which took over in the '70s). I did not know what double-lens reflex meant, or viewfinder, or SLR.

My attention was mostly on the majhi, the owner of the boat, and his son. They were rowing us diagonally across the river, a distance of about a mile, for Rs. 4.

I was poor, my school education coming from scholarship and free books, and also love and respect from teachers and headmaster. I have often wondered, as I have grown up, if I really deserved so much that I received from them.

Coming back to the journey and the camera and the friend, he wanted me to inaugurate it by taking the first picture, and to tell him, not about the mechanics, but about how and with what in mind, or in my eyesight, I composed my pictures, especially since I had no camera of my own. I started explaining balances, sky, water, and took two or three pictures. This is one of them.

The reason for my writing this introduction is less about the quality of the picture, the ability and objectivity to judge which I have lost; but mostly because of the fascination that engaged me during that journey, about the lives of the father and son. They had a little home on the boat itself, with a hanging hurricane lamp, a hookah, and some cooking pots and pans, but most importantly, there was contentment on their faces. I envied them then; I still envy them, not to mention how much I rue having lost that time of my life.

This is a lovely picture apart from being nostalgia inducer.
I look at the picture and see how the oily lithe dark bodies of rowers are captured. They glow. Father keeping an eye on the son and son watching father's back literally and perhaps figuratively. There is a sense on son's face that he is doing all okay by his father. It drips with care between them.
Oh, Calcutta! (not the movie, I am sure)
at 2.5.14 2 comments:
Email ThisBlogThis!Share to TwitterShare to FacebookShare to Pinterest
Labels: photographs_blackandwhite 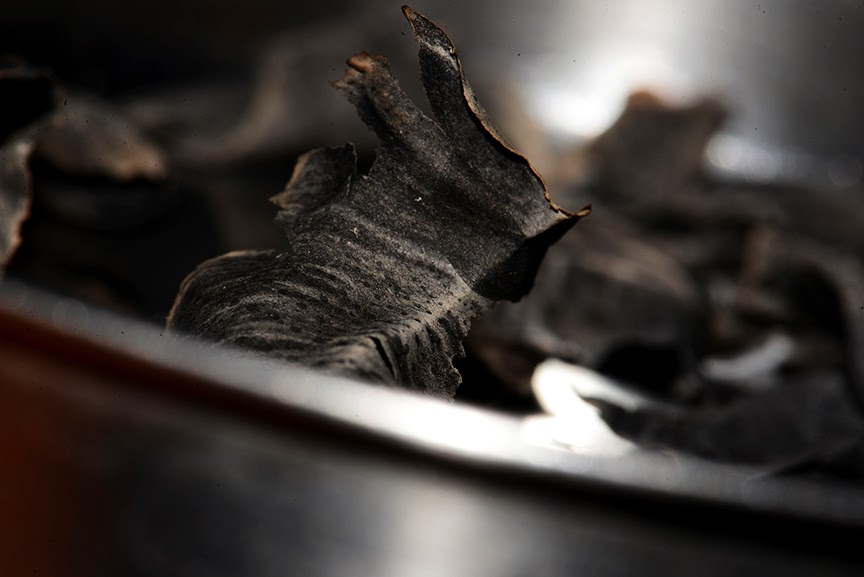 incremental in value as oil
taking a million years in the making
but used as fast as it goes
so much of human life depends
on one or the other of its forms
mindlessly believing
in its commensurate renewal
carbon monoxide carbon dioxide
and the central part of entire organic chemistry
coal
at 1.5.14 2 comments:
Email ThisBlogThis!Share to TwitterShare to FacebookShare to Pinterest
Newer Posts Older Posts Home
Subscribe to: Posts (Atom)