Shankaracharya was walking through a field near a village. Nearby, a farmer was ploughing his land. Elated at seeing such a great personage, he ran towards Shankaracharya to pay obeisance. Falling at his feet he asked, "O great one, tell me the secret of life." Impatient to leave, Shankaracharya replied, "It is all an illusion. There is nothing that is real," and began to walk away.

A buffalo from the field, seeing its master go towards Shankaracharya, also began to run towards him. Mistaking the buffalo's approach as an impending attack, Shankaracharya ran as fast as he could, hit a tree, and all but fainted, huffing and puffing.

The farmer controlled his buffalo and went to Shankaracharya with folded hands, and offered apologies and prayers. Then, most humbly, he asked "My lord, what happened? May I be pardoned for the impertinence of asking: Why did you run, and in the process injure yourself and make yourself breathless? The buffalo meant you no harm." Shankaracharya replied, "Idiot, what are you talking about?"

The farmer, completely out of his wits, looked at Shankaracharya and asked, "What, Sir? What are you saying? Did you not run, and risk injury to yourself? I assure you, Sir, the buffalo meant no harm."

Shankaracharya said, "You fool, I did not run, I have not injured myself, and what buffalo are you talking about? What you think you saw was an illusion. No such thing happened." Saying that, he left the farmer and the rest of mankind in perpetual bewilderment. 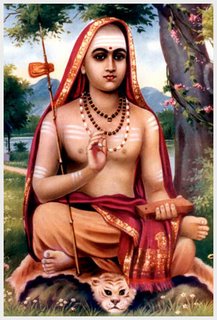 ------------------------------
Pravin Gandhi wrote:
a-propos your post "Maya", my father was fond of telling this story:
A fakir, resting in the shade of a tree, doing nothing, watching a luxuriant crop of sugar cane, asked the farmer, "Do give me a cane. Bhagwaan terea bhalaa kare (God bless you)". The farmer ignored him and went about his work. A bit later, a man came up on a bike, stopped at the field attracted by the luxuriant crop, addressed the farmer with a couple of choice BCMC swear words and asked for a couple of canes. He got it, and rode off. Still later, a policeman came in his jeep, stopped at the field, called the farmer, gave him a kick and shove and asked him to pack the rear of the jeep with the cane. He got it and drove away. Observing all this, the fakir quipped:
"aashirwad no ek pan nahi (not even one for a blessing),
bhaana naa bey (two for swear words)
tup dai ney dhabbo maaryo to jovey etlaa ley (give a kick and a slap and take what you want)"
:)
at 29.7.13 2 comments:
Email ThisBlogThis!Share to TwitterShare to FacebookShare to Pinterest 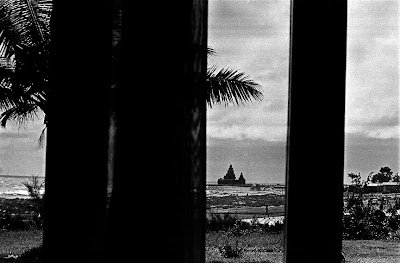 There are multitudes of pictures of this small temple; but I am posting this because it could not be taken today. The window where I stood was in a building that has been torn down. The area around it, a resort, has been filled with cottages, pools, villas, restaurants; and with so many palm trees that it is difficult even to catch a glimpse of the temple. The temple itself has been partly surrounded with a stone breakwater covered with casuarina trees, to protect it from the pounding of the sea. At the time that this picture was taken, one could walk to the side where the temple jutted out on a miniature peninsula into the sea, hold on to two iron rods with chains attached, and be drenched with the waves which continually splashed up against the temple itself.

The temple is ancient, and will probably endure for some time into the future, but the life around it flickers and changes as quickly and awkwardly as the frames of a silent movie, in grainy black and white.

Wikipedia on the history of the Shore Temple
at 14.7.13 3 comments:
Email ThisBlogThis!Share to TwitterShare to FacebookShare to Pinterest
Labels: photographs_blackandwhite 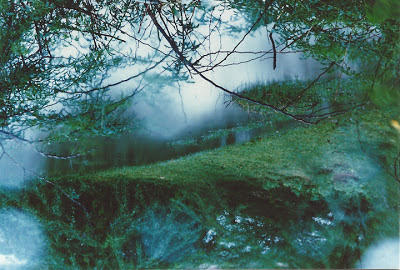 to be trodden upon
to be wiped out

to form again
on another night
perhaps
if its time
has not run out
if time has not
just run out
on everything
away into
oblivion
at 1.7.13 1 comment:
Email ThisBlogThis!Share to TwitterShare to FacebookShare to Pinterest 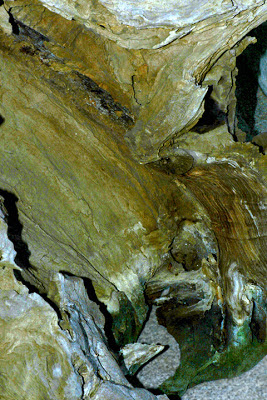 Rocks look so beautifully silky. It does not matter what circa it turns out to be, I keep looking for human fossils.